If you've been in the dating world anytime since 1995, there's a good chance you're familiar with the endless options for online dating websites. Match and eHarmony are two of the oldest and biggest players in the online dating game.

Even with newer dating apps disrupting the industry, Match and eHarmony are still leaders in their niche. Match takes in over $1 billion in revenue annually. In terms of revenue, eHarmony is a distant second, bringing in an estimated $250 million per year.

Their Alexa ranks correlate to their revenue numbers too. Alexa gives Match a global rank of 2,491, while eHarmony comes in at 16,793. Match is the clear winner between these two companies, but we wanted to find out whether there were areas where eHarmony could make up ground against its much bigger competitor.

To do this, we dug into the website analytics of each company. We used Nacho Analytics and SpyFu to take a peek at each company's Google Analytics. What we found was that social media presents a huge opportunity for eHarmony.

Let's set the stage to give you an understanding of the traffic breakdown for both websites:

The main things to take away right off the bat is that both websites do well with direct traffic. eHarmony gets a larger percentage of traffic from organic search, but, as you'll read, it's not a difference-maker. Noticeably absent from eHarmony's traffic breakdown is any amount of social media traffic, which should be a concern for the dating site.

1. Organic traffic: eHarmony looks like the winner, but they're still losing.

In one corner: Match. Match's organic traffic makes up 17.9% of its total website traffic.

In the other corner: eHarmony. Its organic traffic makes up 28.2% of its total website traffic.

Similar to what we saw with Airbnb vs. VRBO, eHarmony has an advantage in nonbranded, organic keywords. Nonbranded organic keywords are keywords where the brand's name does not appear in the search term. For example, for keywords similar to “dating sites,” eHarmony ranks in the top five while Match ranks on the second or third page.

Unfortunately, eHarmony is a big loser in one high-volume, nonbranded keyword: “online dating.” Match ranks at number one for this term. eHarmony comes in at number 14, which is on the second page.

It gets even worse when we compare the data from SpyFu. Match ranks for 17,952 keywords. Of those keywords, Match ranks on page 1 for 4,493 of them. That leads to about 3.51M monthly clicks on Match results.

Looking at the same SpyFu data for eHarmony, they rank for 14,002 total keywords, and ranks on page 1 for 5,579 of keywords. Those page 1 rankings look pretty good compared to Match, but all of eHarmony's keywords only drive 1.06M monthly clicks.

eHarmony ranks for a lot of keywords that probably aren't going to move the needle for the company. One of their highest-volume keyword phrases is “what is love.” That's not a terrible keyword phrase for eHarmony, but you have to wonder whether everyone who lands on the website for that term is actually looking to define the word “love,” or if they're just looking for the timeless Haddaway song?

eHarmony would be wise to reevaluate their content strategy, especially around the keywords that Match owns, such as “online dating.”

In one corner: Match. Match's social media traffic makes up 3.4% of its total website traffic.

In the other corner: eHarmony. Its social media traffic makes up 0.8% of its total website traffic — a number so small it doesn't even appear on our chart above.

Dating is social, and the stigma around online dating is virtually dead. This combination should mean that both eHarmony and Match have the ability to get a large percentage of traffic from the social platforms.

The truth is, as you can tell from the numbers above, they're both terrible at driving traffic from social.

Match and eHarmony need to develop better social strategies — specifically Instagram. It's a perfect platform for both dating sites. We know what you're thinking: “But, Instagram is for Gen Z and millennials, who don't use traditional dating websites!”

The data says otherwise. Hootsuite reports that Instagram has 247 million users over the age of 35. That age range makes up about 75% of Match's users.

In one corner: Match. Match's direct traffic makes up 59.7% of its total website traffic.

In the other corner: eHarmony. Its direct traffic makes up 44.3% of its total website traffic.

Direct traffic is often overlooked, but it's important to understand a website's direct-traffic percentage because it can help you understand how strong that company's brand is. Typically, the more direct traffic a website gets, the stronger the brand. With Match and eHarmony, we see large percentages of direct traffic, likely because each company has spent years building up their brand.

Match may have won this round, but that doesn't mean eHarmony is losing. Dating sites are a hyper-competitive industry. Some estimates say that there are over 8,000 of these services worldwide. When you consider that most sites are relatively similar, it's hard for them to get a competitive advantage. That leaves one thing as the competitive advantage: the brand.

4. New vs. Returning Visitors: Match keeps them coming back for more.

In one corner: Match. Match gets 29.9% of its visitors to return to the website.

In the other corner: eHarmony. eHarmony sees 26.7% of its visitors return.

The winner? Match (although it's a split decision).

We're taking a departure from acquisition sources to look at user behavior. New vs. returning visitors can tell you a ton about your audience, the way they use your website, and even weaknesses in your own product.

We'll set the stage by looking at the overall new vs. returning users for each website:

Match does a better job at returning visitors than eHarmony, but let's dig a little deeper to find some real insight from this data. We'll start by comparing Match's new vs. returning users from social media and direct traffic.

The split for users from social media is 38.9% new visitors and 61.1% returning. This suggests that Match isn't focused on using social as an acquisition channel. Rather, they're doing something that engages current users of the site. This is a bit surprising, considering the sheer number of people who use social media. Ideally, you would want a larger percentage of new visitors from social media than Match's 38.9%.

This likely means that Match either doesn't have a good social advertising strategy or that their budget is very small.

Direct traffic looks great for Match, with 68.5% of their users being new and 31.5% returning. Ideally, they want users to directly return to their website, regardless of how they initially found the website. But it's also important to have a healthy percentage of new users from direct sources. This signifies that your brand-awareness efforts are paying off.

With social, we're seeing a flip in what we saw with Match. For eHarmony, 63.1% of their social visitors are new, while 36.9% are returning. This could signify that eHarmony is focused on brand awareness on the social platforms. It might also indicate that they're running ads targeted at people who have never used their service before. This is actually a good split to see, but when you consider the tiny amount of traffic eHarmony gets from social (remember, it's just 0.8% of their total traffic), eHarmony needs to seriously reevaluate their strategy on social.

Direct traffic takes a hit for eHarmony, too, with the split being 73% new, 27% returning. Returning visitors are 4.5% lower than Match's returning users. While that might seem like a small percentage, in real numbers it means eHarmony is losing thousands of users because they're not returning at the same rate as those on Match. This could signify that eHarmony has an inferior product, or that their audience's expectations don't align with the service eHarmony is providing.

Overall, both sites do a decent job of gaining new users and converting them to returning users. It's obvious that Match should use social as more of an acquisition channel to try to gain more new traffic from the platform.

eHarmony, on the other hand, needs to take a look at what they can do to improve their returning users from direct sources. That's not an easy task or a quick fix, but it is something they need to take a serious look at.

Adding up the scores

eHarmony could make moves with direct traffic, but they'll have to focus on brand awareness, which is a long-term strategy. Rounds 2 and 4 were a different story.

Round 2, the social media round, was a loss for both companies. If eHarmony can sort out their social media strategy, they have a great opportunity to gain some ground on Match. Round 4, new vs. returning visitors, went to Match because of its ability to return users at a higher rate, which may suggest they have a better service. 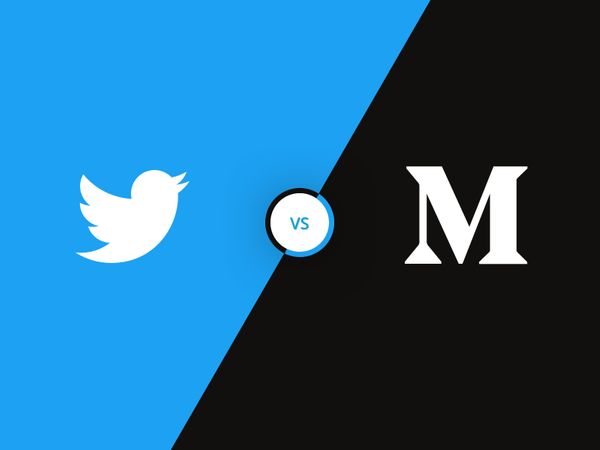 Twitter, one of the most popular social media sites in the world, was founded in 2006 by Jack Dorsey, Noah Glass, Biz Stone, and Evan Williams. Six years later, in 2012, Evan Williams realized that the platform they created wasn't giving people the ability to create quality content

Airbnb or VRBO? Who is dominating the vacation rental market? It may seem like a no-brainer, but the facts may surprise you.