Data-driven marketers live by the mantra, “always be testing.” Landing pages, email subject lines, ad copy, blog images, and anything else with a variable should be A/B tested, and then A/B tested again.

When marketers are A/B testing, they often miss out on one important metric: statistical significance.

Statistical significance will tell you if the results you got from an A/B test are actually indicative of future performance or if those results could be an anomaly.

Just looking at the conversion rate, it seems like landing page B is the winner. Unfortunately, that result isn’t actually statistically significant. If you were to run this experiment again, you might get a completely different set of results. There’s a chance this one test was a fluke because it didn’t have enough data for you to make a statistically significant decision.

That could be a big problem if you make your decision based on this one test. You might end up with a worse result after running a full campaign using landing page B.

Mistakes like that are ones marketers can’t afford to make. In a world where we live and die by the numbers we produce, it’s important to make sure the data we’re basing decisions on is accurate.

What is statistical significance?

A great way to think about statistical significance is to imagine you’re running the same exact experiment 100 times. If you end up with the same result 95 out of those 100 times, your result is statistically significant.

For an experiment to be considered statistically significant using the formula, you need to set a benchmark for your confidence level, or p-value, to be above 95%, in most cases.

Once you hit that level, you can be confident that the results of your test aren’t because of chance, which means if you run the experiment again, you’ll get the same result. Once you have that high of a confidence level, you can make an accurate decision based on the data.

P-value is what makes or breaks statistical significance. It’s basically the number you use to set the bar. Your p-value is what determines if you can say, “yes, I’m 95% confident that I’ll get the same results if I were to test this again.”

The p-value is a number that you set, and it depends on how much margin for error you want to build into your statistical significance calculation.

In most academic research settings, the p-value is set to be less than 0.05. In highly technical scientific experiments where a wrong decision can be life or death, they use a much smaller p-value — often less than 0.001.

For marketers, a p-value that low requires a massive sample size. It usually needs to be so large that it will either take you months to get a sample size big enough, or you’ll never achieve it at all.

Here’s a landing page A/B test where the marketer set the p-value to be 0.001. Notice how many visitors this A/B test required to reach a p-value of less than 0.001:

That level of statistical significance required 220,361 visitors between the two pages. Unless you’re an enterprise company, you probably won't get that many visitors for months.

Fortunately, since marketers don’t deal with life or death data, we don’t need to use p-values that low. We can set our p-values as high as 0.08, which means you’ll need a smaller sample size and a shorter time period to prove statistical significance.

P-value is easier to understand if you convert it to a percentage because it technically is a percentage. If you set your p-value at 0.05, that’s the same as saying, “I’m willing to give this experiment a 5% chance of being wrong.”

If the results of your experiment give you a calculated p-value of 0.046, that equals 4.6%, which is statistically significant in an academic research setting. That means you can say that you’re 95.4% confident that you’ll get the same results if tested again.

Why marketers should care about statistical significance

Basing decisions on data that isn’t statistically significant can have a big impact on your bottom line. Let’s say you’re running an ad campaign on Facebook. You have two different versions of the ad, and you let both versions run for 48 hours.

Here are your results:

It looks like Ad B is the easy winner. Ad B had more clicks on fewer impressions than Ad A, but those results aren’t statistically significant because the calculated p-value is 0.106.

Regardless, you didn’t take the time to calculate that and decide to move forward with Ad B.

Ad B runs for two weeks and spends $10,000. Since you’re a busy marketer who ran an A/B test, you don’t check in on it until the end. It turns out the results from your original A/B test were an anomaly, and the rest of your campaign underperformed:

Had you just stuck with Ad A at its CTR of 2.46%, you would’ve gained approximately an additional 1,772 clicks. That’s not an insignificant number of clicks. All because you didn’t check for statistical significance during your initial A/B test.

What you should do if you get into a situation where your A/B test isn’t providing statistical significance is either continue testing until you have enough data to prove significance or go a different direction with your A/B test altogether.

How to use statistical significance in marketing

To be a true data-driven marketer, you need to start using statistical significance to make your decisions.

Here’s a full example, so you can see this in action:

Say you want to A/B test headline copy on a landing page.

Landing Page A’s headline is what you’ve been using for the past three months. So you’re trying the B split to see if you can get a higher conversion rate with it.

You note your hypothesis, which is: “If I introduce social proof into the headline, then conversion rates will increase.”

Now, you can set your p-value. You choose 0.05 because you want to be very confident that your results will be accurate.

At this point, you’re ready to start your test. You start sending traffic to both pages, and after seven days, you have these results:

It looks like Landing Page B is the better performer based on the conversion rate, but let’s test for statistical significance.

Using a statistical significance calculator, your calculated p-value is 0.0455, which is less than your benchmark p-value of 0.05. That means you’re 95.4% positive that you’ll get the same results if you were to run this test again. That makes this test statistically significant, meaning your hypothesis is supported.

You can now confidently say that you’ve made the right decision by introducing social proof into the headline. It’s time to turn off the traffic going to Landing Page A and direct it all to Landing Page B.

What if you never find statistical significance?

What are you supposed to do?

You have a few options here. There’s a chance that your variables are just too similar to give you any significant results. If you suspect that’s the case, you should restart your test with two different variables.

For example, let’s say you’re running a Facebook ads A/B test. After a few days, these are your results:

Ad B looks like the winner based on CTR, but the p-value is 0.106, meaning it’s not statistically significant:

So you continue to run the A/B test for another week. After another week’s worth of data is collected, your results are similar. Ad B continues to have a higher CTR, but performance has slipped on it a little bit:

Your p-value is now 0.104, so you’re a little bit closer to statistical significance but not close enough to call it statistically significant:

This is where practical significance can come into play. If you convert that p-value to a percentage, it gives you 10.4%. That means there’s an 89.6% chance that you’ll get the same results if you repeat the experiment.

In this case, you can use practical significance to say that Ad B is the higher performer. It’s not statistically significant, but in a practical sense, you have a high enough sample size to be relatively confident that your results will stay the same.

Use statistical significance to be data-driven

The biggest step to being a data-driven marketer isn’t collecting more data. It’s actually learning how to use data to make accurate decisions.

Making accurate decisions means using statistical significance to prove that your data decisions are accurate and will give you the same results time after time. 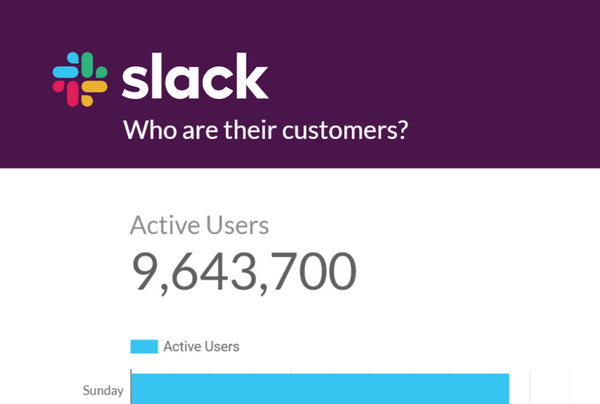 One of my favorite things to do with Nacho Analytics is to look at who a company’s customers are, where they come from, and which features they use most. According to SEC filings, 40% of Slack's revenue comes from enterprise customers - and I wanted to see who they are. I was surprised...